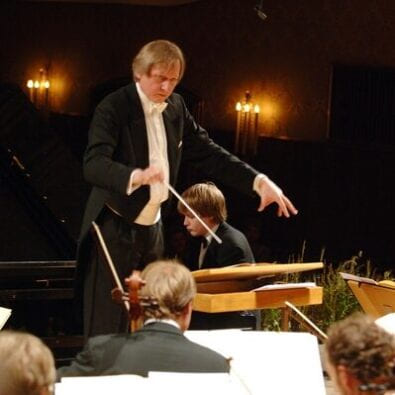 Alexei Kornienko is an outstanding musician whose work is characterised both by an unconditional and joyful attention to text and also a boldness in interpretation. This seeming contradiction in fact stands the Austrian conductor Kornienko in very good stead. His work as a pianist of the Russian school, with his extraordinarily wide Classical and Romantic repertoire, is combined profoundly with his work as a conductor, which he has steadily expanded in recent years.

Born in Moscow, he began music lessons at the age of fi ve, studied at the Tchaikovsky Conservatory in Moscow (piano class Zak) and in Charkow (conducting class Jordania), and was prize-winner at the International Rachmaninov Piano Competition in Moscow. Since his move to Austria in 1990 he has made his name as a respected competition juror as well as a teacher at the Kärtner Landeskonservatorium (Carinthian State Conservatory). He is co-founder of the Gustav Mahler Ensemble and a member of the Bösendorfer Artistic Club.

Kornienko divides his career between the piano and the conductor’s podium. Together with his wife, the acclaimed violinist Elena Denisova, he is also active in the rediscovery of forgotten treasures of Classical-Romantic period chamber music: Musik um 1900, their CD "Vienna 1900" (Gramola Vienna) of works by Robert Fuchs, Pavel Singer and Alexander von Zemlinsky, brought them international success.

Kornienko has been artistic director of the Wörthersee Classics Festival since its foundation in 2000, and strives each year to create a programme of the highest quality.