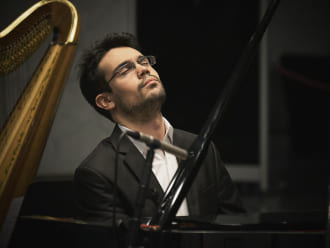 Ivan Bašić is a prizewinner of international competitions, sought-after soloist, passionate chamber musician, and – a storyteller. Pristine sound, captivating phrasing and energy make his performances praised by audiences from Portugal to Japan, while the current season sees Ivan make his debut at the Menuhin Gstaad Festival, embark on a Swiss tour of Tchaikovsky's First Piano Concerto, and return to his beloved Belgrade for a heartfelt performance of Beethoven's Third Piano Concerto.

Through creative programming, openness to often neglected repertoire and energetic performances, Ivan has become a regular guest of festival stages in Europe, Asia and Africa – in Davos, Gstaad, Porto, Gmunden, Cairo and Tokyo. A solid repertoire of piano concertos has led him to perform with the Musikkollegium Winterthur, Roma Tre Orchestra, RTS Symphony Orchestra and to collaborate with conductors Srba Dinić, Massimiliano Matesic, Christian Schumann and Pawel Gorajski. As a pioneer of the works of Serbian composers, he was the dedicatee of the compositions of Aleksandar S. Vujić and Igor Jaćimović.

Ivan Bašić won second prize at the Concorso Internazionale Pianistico Roma 2021 as well as numerous prizes at competitions in Porto, Belgrade, Radovljica and Banja Luka. His achievements have also been recognised with special acknowledgements, such as the prize of the "Cuomo" Foundation. In 2020, Ivan was awarded the prestigious Kiefer Hablitzel Prize as one of Switzerland's leading young musicians. In Serbia, Ivan was twice elected Young Musician of the Year: in 2013 and 2021.

After years of recording for radio and television, Ivan released his first compact disc in 2021 with the works of Mussorgsky and Ravel. During the pandemic, Ivan collaborated with the Swiss platform Art on Air and produced two online concerts and a world premiere of Giles Wollenmann's Piano Concerto.

Ivan was born in Belgrade in 1996 and discovered classical music at the age of 5 when he urged his parents to take him to a music school. He got his first piano at the age of seven and has dreamed of becoming a pianist ever since. After completing his studies with prominent pedagogue Nevena Popović in Belgrade, he moved to Zurich in 2017 to learn the art of playing with world-renowned pianist Konstantin Scherbakov. Ivan has further shaped his artistic views by attending masterclasses with Boris Petrushansky, Jacques Rouvier and Stephen Bishop-Kovachevich.